Program on the Environment

Anna Mines graduated in December 2014, with a double major in Environmental Studies and ethnomusicology.

Persuaded by a friend to visit and stay in Italy for a while after graduation, Anna left Seattle on a six-week backpacking trip, which included a WWOOF stint in the southern Italian town of Maratea. She then settled in Rome where she’s currently on a student visa, perfecting her Italian and working on launching a responsible tourism business.

Over an Italian meal in Seattle last December, brought together by a mutual love for Italian culture, Anna met Elizabeth Weitz, who pitched a business idea for a responsible tourism business that would help stimulate Southern Italy’s struggling economy.

The problem both women want to address is: tourism money is not going to small, local businesses and young people who travel are barely interacting with local people. Further, young people in Southern Italy are leaving their hometown in search of better economic prospects.

Anna sees the lack of immersion when traveling as a lost opportunity to both enrich one’s education and be a part of another country’s culture.

“Tourism is going to happen anyway, so why not do it in a way that will benefit everyone?”

From Idea to Impact

Starting a business was a daunting prospect, yet Anna was undeterred. She took online business courses via Acumen and learned about social enterprises. She and her partner, Elizabeth (who lives in the Bay Area) share responsibilities and communicate virtually each week to track progress.

The duo want to form a social enterprise and set up intimate tours where a group of no more than 15 people would be further split into groups and provided an immersive experience staying at local B&B’s, sharing authentic meals over conversations with locals, and participating in adventures with local guides. Businesses that practice social and environmental practices will be featured on the tour. 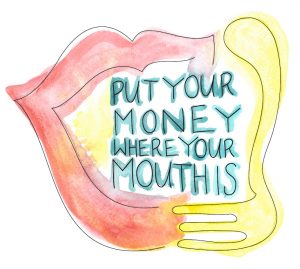 Spurred by the idea that the tourism season is very short in Southern Italy and provides local business owners barely enough to sustain themselves throughout the year, the business: PYMWYMI (Put Your Money Where Your Mouth Is) would give adventure-minded tourists who don’t want the hassle of planning their own trip the opportunity to support businesses during the low-tourist season and help sustain livelihoods.

“Hard-working people can’t do what they love because of lack of access to funds.” Anna acknowledged her privilege, stating she has never had to sacrifice her dreams to earn a wage. Part of her drive in joining this business is to make a difference for people who want to earn a decent living and who are keen on celebrating and sharing their culture with others.

Recently featured on Amy Poehler’s Smart Girls, the entrepreneurs are working hard to meet their KIVA fundraising goal and bring this impactful idea to life.

How Environmental Studies at UW helped unearth a passion

The major gave Anna the flexibility to take varied classes, and she cites a Global Environmental and Politics class, where she did more research into the slow food movement. Her Sustainability Studio class and Urban Farm class influenced her decision to go WWOOFing in Italy, and a Cultural Anthropology class taught her about the importance of identity.

“All we have in this world is our identity and we care about it so much,” says Anna. “Understanding how intertwined the food culture is to regional Italian identity is so important. If you pay attention to your food, and where it comes from and how it’s grown, you can be a healthier society.”

The town where Anna worked on a farm, in Maratea, understands this concept and practices it. Now they just need more business.

When asked if she has any words of advice for Environmental Studies majors, Anna said: “Take your capstone by the horns! Do what you can with it, get creative, be assertive. I came up with a project that combined my two majors and my internship host, the Duwamish River Cleanup Coalition, happily let me run with it.”

“The capstone was the most rewarding part of my academic experience. Sean (McDonald) does a great job of making sure you will acquire new skills and challenge yourself, while still setting you up for success.”

Only five days remain to support Anna and her business partner, Elizabeth. Visit their Kiva page to lend funds so PYMWYMI can establish a viable tour itinerary and get their business off the ground. Remember, this is a loan, so you will get your money back. If the duo doesn’t reach their fundraising goals, they lose the funds already raised. Your support is much appreciated.

UPDATE: Anna and Elizabeth send their thanks to the community for supporting their business; they raised the full amount needed for their Kiva loan to begin their research and develop the PYMWYMI experience.