Program on the Environment

“While the idea of ‘wilderness’ is very much a part of the American psyche, and central to the American environmental movement, it is also an idea that literally and figuratively dispossesses Native Americans of their traditional homelands. Glacier Bay, or Sit’ Eeti Geeyi as it is called in Tlingit, is no exception to this.” – Tim Billo

This past summer, Program on the Environment lecturer Tim Billo traveled to Southeast Alaska with nine UW students for a bold new course exploring wilderness management and its unintended consequences. While there, students examined the complex and evolving relationship between the Huna Tlingit People and the National Park Service (NPS) in Glacier Bay National Park.

Tim’s class was immersed in the culture and history of the region and the complex reconciliation process between the Huna Tlingit and the NPS. They grappled with questions about how a common understanding was achieved to share in the stewardship of the park, and how a partnership to preserve the subsistence rights of the original residents would balance out with the need to respond to human-induced climate change.

From a kayak camping trip through the backcountry with inspirational readings — including poetry by Tlingit poet, Nora Marks Dauenhauer, — to student-led discussions on the future of conservation, to encounters with bears, to the stories, songs and shared meals with the people of Hoonah, the place-based learning elicited deep reflections and broadened perspectives.

The class was welcomed by and learned from Bob Starbard, tribal administrator of the Hoonah Indian Association (HIA); the people of Hoonah; Kim and Melanie Heacox, author and ranger respectively; and Philip Hooge, superintendent of Glacier Bay National Park (along with several of his colleagues). Former Secretary of the Interior Sally Jewell also joined the trip, generously sharing her insights. 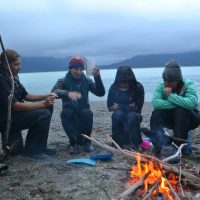 One of many deep conversations around a fire, in the wilderness of Sit’ Eeti Geeyi, the Huna Tlingit homeland in Glacier Bay National Park. On the trip, each student took turns leading a discussion on a topic relating to course themes. Photo: Tim Billo 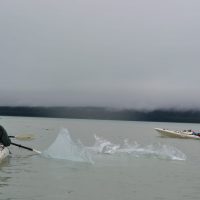 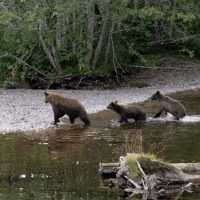 Students heard there are four grizzly bears for every person in Hoonah. Sure enough, a mother and her young cubs were spotted soon after. (Photo: Owen Oliver).

The concept for Tim’s new course and the ensuing class trip was made possible through friendships and connections that started 20 years back, when Tim was interning as a park ranger at Glacier Bay National Park. His time in the famed living lab made a lasting impression and it was there he became aware of how the environmental movement had been complicit in the hardships imposed on Native Americans, including the exclusion from their homelands and loss of language and culture — all in the name of wilderness preservation.

Around the same time, the NPS and the HIA were beginning to address their fraught relationship, shifting efforts towards more mutually beneficial outcomes. These efforts culminated in the building of a tribal house in the national park, which was occupied as part of the National Park Service Centennial celebration on August 25, 2016 in a ceremony jointly planned by the HIA and NPS.

Today, the cooperative relationship between the Huna Tlingit and the National Park Service demonstrate that together, culturally inclusive conservation practices can enrich and benefit both people and planet. The efforts in Glacier Bay could serve as the model for future wilderness management.

“The Huna Tlingit now have a tribal house in the national park, they conduct half of all educational programming in the park, and they have regained some rights to traditional subsistence practices in the park. The NPS recognizes these practices have been part of the cultural and biological fabric of that landscape since the very beginning. The Huna Tlingit, in turn, support the mandate of the Park Service to maintain the landscape of Sit’ Eeti Geeyi as a cultural and biological resource, open for future enjoyment by all Americans.” – Tim Billo

Read more in the reflective blog posts from Tim Billo and students in his class and learn about their extraordinary journey to Alaska this past summer.